This is a part of a series of articles on Apache Stratos Cartridge Agent. If you feel like you’ve missed the memo, why not start from the first article?

The Cartridge Agent is (usually) the first service that starts in a spawned Cartridge instance. From that point onward, it is responsible for keeping the relevant services running, communicating with Stratos to subscribe and publish to message broker topics, processing received events, artifact distribution and health statistics reporting. In this article we will discuss in detail, in which order these tasks are performed. 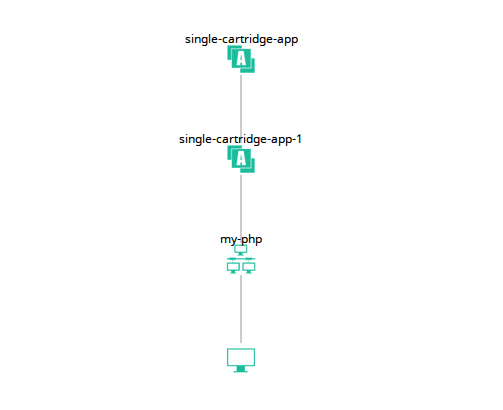 The sample scripts and artifacts for our scenario is available in the samples folder of the Stratos source. You can deploy this sample in any one of the available IaaS options including the Mock IaaS that is available in Stratos for developer testing purposes. Following is how it can be deployed in the Mock IaaS.

What to Look For

Most events that occur in a successful execution cycle of the Cartridge Agent is illustrated as a flow chart. This does not include the failure scenarios and some multi-threaded executions are not properly illustrated, due to the limited nature of showing such details in a flow chart. However it is a good reference point to understand the Cartridge Agent life cycle in a sequential manner.

The state transitions can also be seen from the reference image. Additionally, you can understand how the member state transition happens from the Autoscaler side by going through this article written by Lahiru Sandaruwan.

With this knowledge at hand, let us dive in to the walkthrough right away.

When the application is deployed after creating the Cluster Monitors for each cluster of Cartridges, Cloud Controller issues instance creation requests to the IaaS via JClouds. The instance state at the moment is CREATED.

When the instance creation is complete, the IP addresses are assigned, and the instance starts execution, the status changes to INITIALIZED. The init scripts are executed and the Puppet agent downloads and applies the related Puppet manifests to the instance. Puppet is also responsible for starting the Cartridge Agent process. In the earlier releases, Puppet additionally started the service processes, for example Tomcat server etc. However, in the new release it is the responsibility of the Cartridge Agent to check and start the service processes. To achieve this, a Cartridge Agent plugin has to be written which will start the process.

The reason to move the responsibility of starting the service to the Cartridge Agent was to make sure that the services would not be starting without artifact distribution succeeding for repository based Cartridge types such as Tomcat, PHP or WSO2 Identity Server. For example, for a Tomcat instance, starting the Tomcat server without the repository artifacts not cloned in to the webapps folder, does not make any sense. Therefore, the service should not be up and the Cartridge Agent will not be publishing the InstanceActivatedEvent to the message broker.

After the Cartridge Agent is started it will start listening to the following topics in the message broker.

Therefore, the Cartridge Agent should wait until it receives the first CompleteTopologyEvent. As mentioned before, this waiting will be at most 60 seconds.

Just receiving the CompleteTopologyEvent is not sufficient. The Cartridge Agent should also verify that its instance is present in the Topology and the status of the instance is INITIALIZED. Usually, this will be the case when the first CompleteTopologyEvent is received, however there can be instance that it would be few minutes until the member is set to INITIALIZED. Cartridge Agent will also wait for that to happen.

After the instance status becomes INITIALIZED and the message broker topic listeners are registered, the Cartridge Agent will publish InstanceStartedEvent to the instance\status topic. This changes the status of the instance from INITIALIZED to STARTED.

When the instance status changes to this state, the Cartridge Agent’s next responsibility, from Stratos point of view, is to go in to the ACTIVATED state. This status is achieved through two effective flows, based on the type of the instance.

If the instance is for example a MySQL instance, there is no need for a repository to be cloned inside (for most cases). In this case (determined by the absence of REPO_URL in the payload) the Cartridge agent checks if the service ports (ex: MySQL ports) are running and immediately publishes the InstanceActivatedEvent.

Once the instance reaches the ACTIVATED stage, the initial tasks of the Cartridge Agent are done. It will periodically update the artifact repository based on the configuration, and would react to any events received via the message broker.

However, an instance can be directly classified as obsolete too, as described by the the first post of this post series. If it fails to post health statistics events to the Complext Event Processor for more than 60 seconds, it will be classified as an obsolete instance and will be queued up for termination.

When an instance reaches the Pending Termination queue, an InstanceCleanupMemberEvent will be published to the message broker. The relevant instance picks up this event and does the necessary cleanup operations and subsequently publishes that it is ready to be terminated by publishing InstanceReadyToShutdownEvent to the message broker. When that happens it will be moved up to the obsolete queue.

There are timeout values for the instances to be in these queues. The default value for an instance to be in the pending termination member list is 30 minutes. If the relevant InstanceReadyToShutdownEvent doesn’t get published within that timeout period, the instance will be automatically moved to the obsolete queue. If the member termination from the IaaS doesn’t successfully complete within the default timeout value of 24 hours, it will be considered as an instance that cannot be terminated by Stratos and will be removed from the obsolete member list. The timeout values for these can be modified by modifying the pendingTerminationMemberExpiryTimeout and obsoletedMemberExpiryTimeout values respectively in the <STRATOS_HOME>/repository/conf/autoscaler.xml configuration file.

When the instance reaches its life time, so does this post series on the Apache Stratos Cartridge Agent. There are few minute details that have changed while this series was being compiled, however the overall information about the architecture and the function remains unchanged.

As always, the best strategy to understand the function is to go through the code. You can checkout the source for Apache Stratos from GitHub. Any issues or clarifications you come across can be quickly resolved by going through the documentation. You can also get help and communicate with the Apache Stratos community via the mailing list.

Originally published at chamilad.github.io on March 22, 2015.