In the earlier post on setting up Apache Nifi and Nifi Registry, two Nifi and Registry deployments set up and integrated with each other. This post will focus on automating the migrations between the two environments. Just to refresh, the following diagram shows what we are trying to achieve. 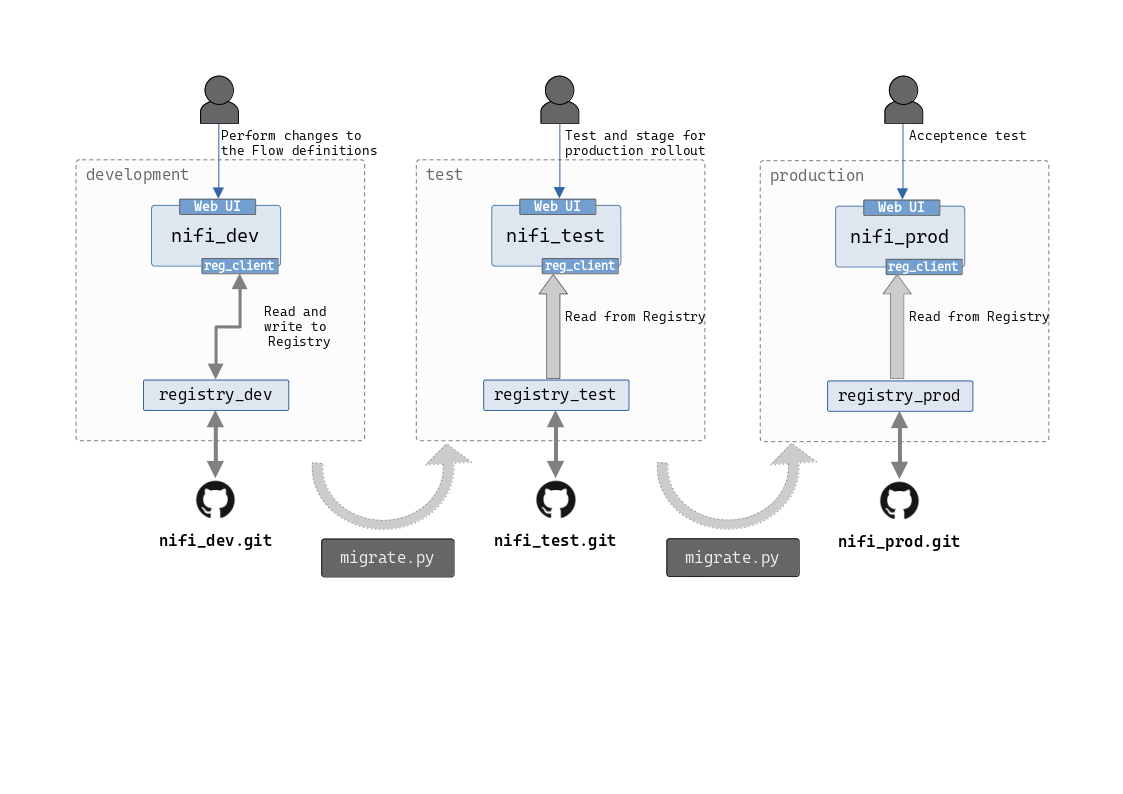 Though this shows three environments, we have only taken the dev -> test step into consideration in the current and the previous posts. This is because once you automate the series of steps, it’s just a matter of pointing the script to the next step.

Both Nifi and the Nifi Registry expose RESTful APIs that can be communicated with through HTTP. However, it’s far easier to work with an API when a good SDK is available. In Nifi’s case, this is NipyAPI. NipyAPI SDK has built-in methods to work with both of the products and is has good documentation that makes the whole exercise a pleasant experience.

In terms of what we want automated, the series of actions we want to focus on are the following.

They look pretty simple, however there are more considerations in each of these steps.

Connecting to the dev environment

Before we do anything, we need to point the SDK to the dev environment. We do this by using the util.set_endpoint() function.

The method util.wait_to_complete() is an interesting one. As you can see, it allows a blocking operation that waits for a given endpoint to be up and available, so technically, the script can start execution before the Nifi and Registry instances are up and ready to receive requests.

Note that the APIs for each of the components are available at the -api suffix application, not at the Web application.

We ended the previous post by committing the sample Process Group RandomEvents to version control. However, in a real world scenario there would be multiple, tens of Process Groups in Nifi to be managed. While you can list all the top level Process Groups on the Canvas (the Canvas is the Nifi visual editor UI presented to the user when visiting the Web Console), you may not necessarily want to do that, especially on a dev environment, where different Data Engineers would be working on Process Groups at different states. 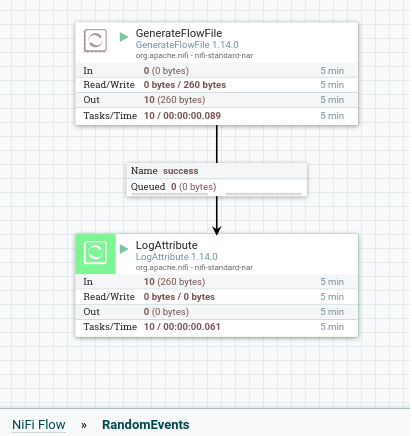 A better way to do this is to define a list of Process Groups to be migrated. The script can then lookup the presence of each of the names and export them separately, rather than collecting all the Process Groups across the Canvas.

This can be improved (or depending on your view, made complex) by adding another dimension to the Process Group name input. You can also make it so that the version that should exported for each Process Group is also defined in the input. This would be useful, when it’s required to allow development to progress without waiting on delivery to happen at the same pace. Data Engineers could implement certain changes, commit to the Registry, and continue implementing breaking changes, and when the time to roll out the earlier changes to test comes, the older version can be specified for each Process Group so that the script would only export those versions, and not the latest.

Furthermore, there could be uncommitted changes on the Nifi Canvas, that may have been missed from being added to version control. We can check this using the Nifi API, just to make sure that we are not unintentionally leaving wanted changes behind.

With these in mind, let’s start writing the export logic.

There are few things to elaborate on in this part of the script.

Importing back to test environment

Connecting to the test environment

Before we perform any API calls, we need to switch the connection to the test environment.

We need to consider several scenarios in the case of the test environment.

If all these checks pass, we can proceed with importing the Process Groups on to Canvas.

Well, not exactly. There is an additional step we have to do before actually performing the API call to import Process Groups.

A Parameter Context in Nifi is basically a set of key value pairs that can be assigned to a Process Group (top level or inner ones). This is a concept that can be used to avoid hard coding environment specific values such as URLs, credentials, parallelization counts, and similar things. By using a Parameter Context, you are basically decoupling the business logic from the actual values.

For an example, if there’s a WebSocket service that a certain Processor connects to, the URL to connect would be different in dev (and possibly test) environment than the one in the production environment. In this case, hard coding the URL in the Processor properties would make it hard to smoothly transition a change through the path to production. In this case, a Parameter Context can be defined (say devparams) in dev and the URL can be defined as a value with key wssurl. In the ConnectWebSocket Processor, this value can be referred to as {#wssurl} and Nifi will assign the value during runtime from the Parameter Context.

This however presents a problem for our script. When we used versioning.export_flow_version() function to export the Process Group, the associated Parameter Context was also exported. This can’t be directly imported into the test environment, since Nifi does not allow importing an attached Parameter Context. In the versions that I deployed the more specific version of this script, Nifi would just put out an NPE without a proper explanation, however the cause is clear.

After sanitization, we are finally ready to perform an import. After an import, we have to update Nifi Canvas so that the latest version imported into the Registry is reflected on the Canvas. However the way to do this differs if we are updating an existing flow. Therefore, we have to first check if we need to perform an update API call instead of a create one, by checking if the Registry Bucket already has a Flow with the same name (a minor detail to note, if the Flow existed on the Canvas and not on the Registry, we’d have errored out during the checks above).

With these considerations in mind, we can start writing the rest of the logic.

Things to note in this part of the script are,

The final result of this script being executed can be seen in the following screenshot. dev is on the left side, and test is on the right.

If I wanted to propagate a change, I can do so by committing the changes again to the Registry in dev and running this script again. 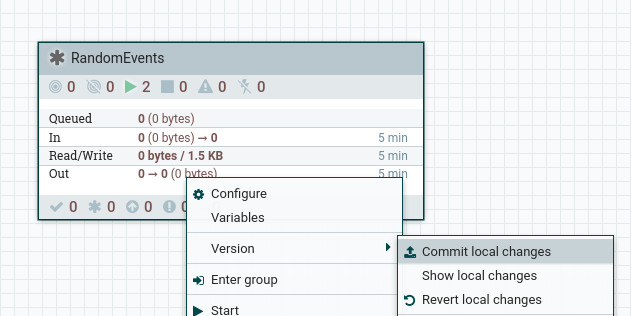 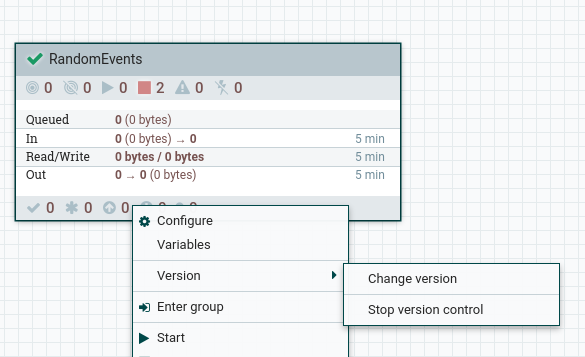 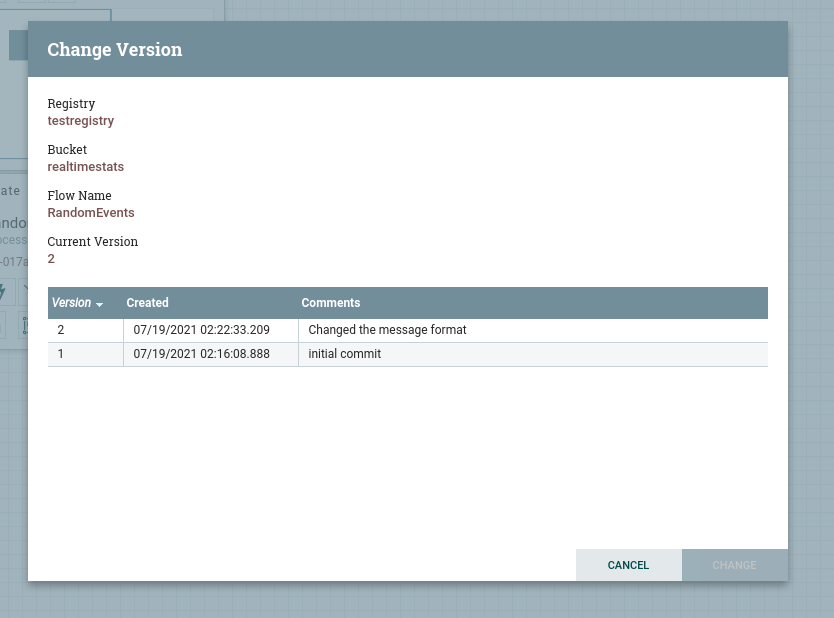 You can also check the version history from the Registry UI itself. 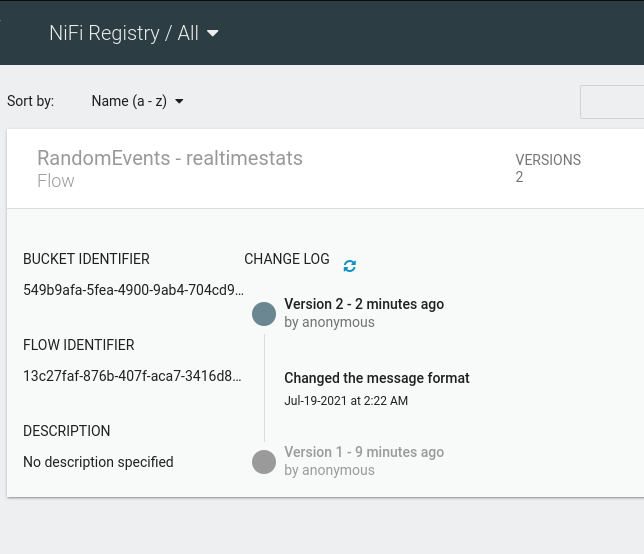 This is just one way of performing this task. The decoupling between Nifi and the Registry allows different designs to be implemented based on organizational requirements.

The code and the config files referred to in these two posts are available at chamilad/nifi_cicd_poc repository. Please open an issue if you want to clarify anything.