When it comes to deployment observability there are multiple, comprehensive solutions that can handle almost any system of scale you throw at them. I said almost, because there are certain stories that do not require setting up a central monitoring server with satellite agents to collect and enrich data.

For an example, consider a scenario where you’re troubleshooting a certain single process for a particular period of time. You want to collect the approximate CPU usage, approximate memory usage, light weight process (aka thread) count, and the TCP connection count. You want these stats collected during the time period you’re conducting load test against the process.

There are a list of well established tools that could provide the results we need. However, with sophisticated functionality comes complex setup instructions. Even if you skip a system with agent based monitoring, you’ll still be yum install ing, apt-get ting, or make install ing stuff. Sometimes the window is too narrow for these to be done, so much that by the time you’re setup, the issue has been resolved in some mysterious way that you start believing in miracles again.

After a little bit of Googling, I wanted to write something myself (living the dream!). I wanted to use as minimum bootstrapping as possible to collect a reasonably accurate set of metrics for a brief period of time. I wanted the collected stats to be human readable as well as quickly converted to a visualization.

I wanted something dot slashable instead of setting up an Icinga2 setup.

I have to admit, Bash is kind of the proverbial hammer for almost every problem of mine. It’s easy to become so. Quickly written, quickly tested, and quickly deployed, Bash scripts are one of the most versatile tools I’ve come across.

So to come back to the problem again, I wanted to collect metrics for a single process, for a controlled period of time, and output (somewhat) both human and machine readable numbers.

Comma Separated Values (CSV) is the obvious easy choice here, though there could be more sophisticated options. A CSV file

Now it’s just a matter of collecting the information.

To keep to the principle of using minimal bootstrapping, I opted to use the top tool to collect CPU and Memory usage.

Another everyday tool to the rescue.

I wanted to count the number of outgoing TCP connections the process made during the load testing (we wanted to see if setting TCP keep_alive settings were making any difference).

Of course, there are other ways to collect the same information. The accuracy of some of the metrics, like the CPU usage, can be argued about too.

This information is then written as a CSV entry into a file.

In terms of data collection, this is enough. However, we could go a bit further with minimal tools. For an example, let’s plot this data as graphs to get a better idea on spikes during the selected time period.

Plotting graphs is also a task with a lot of options in Bash. Out of these, gnuplot is the best tool to start with. It’s a well established tool (started out in 1986) with little complexity at its core.

We have to break our aim on using existing tools here though. Most systems do not have gnuplot packed in.

That should do for Ubuntu/Debian.

gnuplot can work with a variety of data files. To let it know that the input file is a CSV we can set the datafile separator .

It also supports a number of output formats. In this story, we only need a graph output to an image file. We can set this information with the following. We are specifying the png output ( pngcairo is only available in certain systems but produce better looking anti-aliased lines), with image dimensions of 1024 x 800 .

The first graph to plot is the CPU and memory usage.

After setting the filename, the graph plotting is done, specifying the functions to perform on the data.

$csv_filename — The data set to use

with lines — Graph a line chart

We can plot the memory usage (third column) on the same graph.

Likewise the other metrics can be plotted separately, 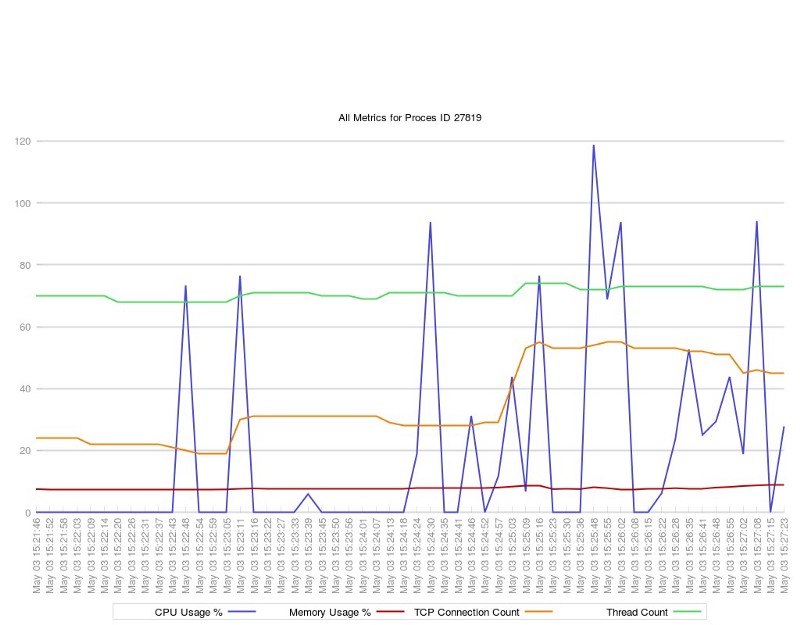 Of course these are not the only directives given to gnuplot for these graphs to be generated. Everything from the position of the key, to the axis line colors can be configured to the detail.

gnuplot has a interactive shell where these commands can be given. However, this story requires a less involved approach. All the directives can be provided to gnuplot through heredoc, or <<- EOF notation.

The above will display all the output types supported on the system. Similar to above, all the directives are fed to gnuplot to produce the graphs.

More an exercise than a comprehensive tool, I collected all the above into a single script to be executed. The source is on Github.

The aim of the script is to be executed on a remote server. What it does is to cover a narrow set of requirements at the lower end of the monitoring spectrum. On the other side are the tools like AppDynamics, Icinga, and graphing tools like Graphite, and Grafana. This would cover the stories where we wouldn’t have the time or the resources to setup a comprehensive system, just to monitor a single process for a brief period of time.