AWS Secret Manager supports a several types of secrets. These are mainly to support effective secret management by integrating them closer with the AWS Services they support. These are mainly various types of database services offered by AWS, which is one of the key uses for using Secrets Manager to manage master credentials.

One of the key advantages of using first class secret types for the scenarios they support is, built-in automatic secret rotation functionality. With secret rotation, you can implement security best practices in credentials management with minimal effort.

However for custom secret type secrets, secret rotation takes a bit more of an effort to implement. This is purely because the particular secret could be associated with practically any type of service or process and needs specific steps to be followed to implement the rotation process for it. AWS makes it really easy to implement custom secret rotation logic with close support from AWS Lambda as a compute layer. In the following sections, let’s dive into an example on how to do this.

A secret in real-world is an evolving item. Even if the value wouldn’t change overtime, at a given moment, the value of the secret is only known after retrieval. With security standards and controls containing frequent credential rotation as important to implement, the party that uses the secret will have to depend on the secret management tool to provide the proper value for the secret at the moment.

AWS Secrets Manager handles this aspect of an evolving secret by using staging labels. For a given Secret in AWS, there could be three staging labels corresponding to three versions of the secret value at a given moment. These are,

Let’s consider a custom secret where the secret is derived from a custom logic and should be rotated in a third party system. The steps to implement proper rotation for this is to,

Adding a secret in Secrets Manager is pretty straightforward. While doing this, make a note to not enable Automatic Rotation, since we don’t have the Lambda function ready yet. If you use a AWS KMS Customer Managed Key as the encryption key for the secret, make sure the Key Policy allows access from the Lambda function as well.

In this case we have set the initial secret value to a random kn6aTD5*$$*n7v. However it could be (for example) the credentials you generated for a custom database. 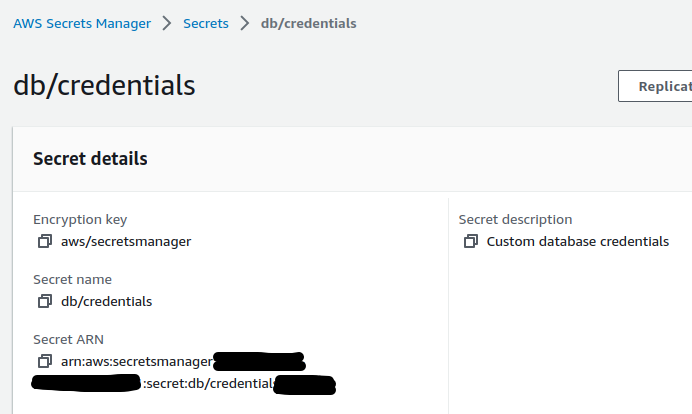 For this post, let’s write the rotation Lambda implementation in Python. The concepts are the same for any language targetting the runtimes supported by Lambda.

All code is available on the Github repository.

When creating the function, define a new Execution Role with the following permissions.

Make sure to attach the AWSLambdaBasicExecutionRole policy to the Execution Role as well. This allows the Lambda function to write to CloudWatch Logs. Without this, you will not be able to properly troubleshoot an execution.

Invoking the Function from Secrets Manager

To do this, once the Lambda function is created, go to Configuration -> Permissions -> Resource-based Policy Statements and add a new policy. Specify AWS Secrets Manager as the service to be granted lambda:invokeFunction permission. 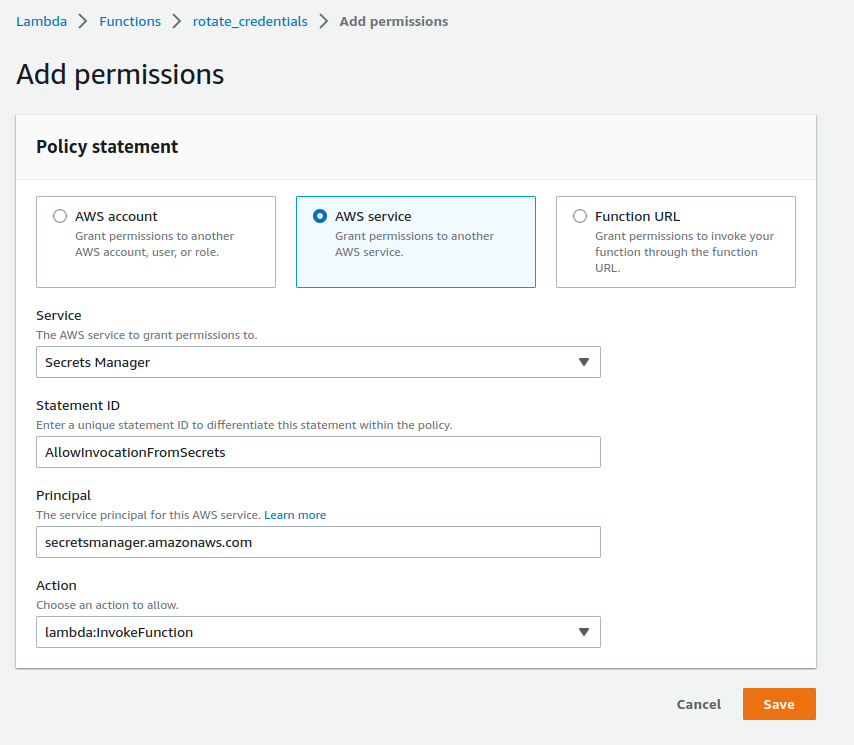 During a secret rotation process, a series of “steps” are followed in order, that expects the different kinds of work that should be done for rotation to be performed during each step. When automatic rotation with a Lambda function is enabled, AWS Secrets Manager calls the function at least four times for the same secret. During each call, a different “step” is expected to be executed by the Lambda function. These steps are,

As mentioned above, each invocation of the Lambda function during the rotation process receives a payload similar to the following.

When writing the Lambda function, we can check the Step value in each invocation and implement the different steps as needed. When persisting the new value, the ClientRequestToken should be used as the version ID.

The handler function for the Lambda function is handle_event(). We’ll be checking the step that invoked the function execution in this function.

Each execution retuning None is a successful execution for Python3.9 runtime for Lambda. Let’s dive into the sample implementation steps next.

This is the first invocation of the Lambda function in the rotation process. We should generate what should be the next version of the secret in this step. For our sample scenario, we generate a random password.

When persisting the new version, we label it as AWSPENDING. Ideally, a given secret would have a version labelled AWSPENDING only during the brief rotation period only. If all goes well, this version should transition into AWSCURRENT. The VersionId of the new version is the ClientRequestToken that was used to invoke this step. If you’re seeing errors related to different ClientRequestToken being used to persist or transition secret versions, it probably means a version with AWSPENDING staging label exists for the secret from a previous rotation attempt. In those cases, investigate the scret with AWS CLI and remove the unwanted version as needed.

You might need to run cancel-rotate-secret on the secret if the rotation is being retried. Typically, a failed rotation is retried and given up after 5 attempts. After fixing the versions, go back and enable Secret Rotation again. 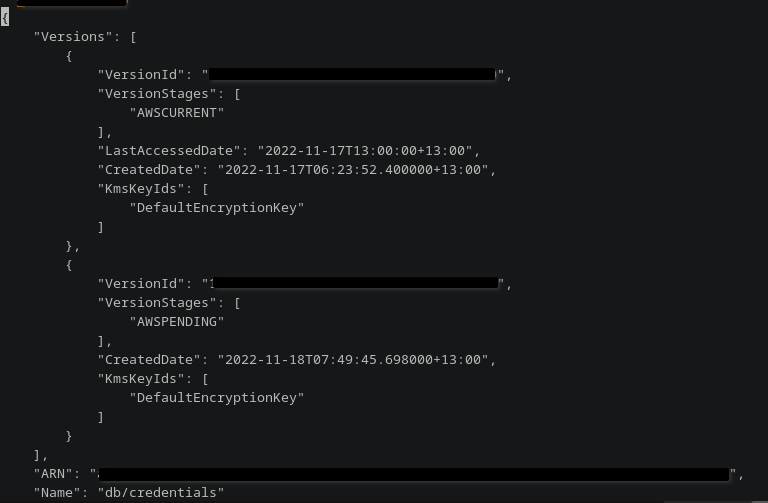 You can alternatively write this into the rotation logic instead. For any failures after writing the AWSPENDING version, you can execute an update_secret_version_stage() call.

The second step of the process is intended to be used to apply credentials and other types of secrets that are to do with external services. For an example, for a database credential, this could be applying the new value (with the AWSPENDING label) as the user password.

For cases where the secret has nothing to with an external service directly or if the external service does not support an API to rotate credentials or tokens with, this step and the next testSecret step can be skipped.

The next step for secrets that are directly related with external services that implements the previous setSecret step is to verify the new version of the secret is usable from this point onwards. This can be as simple as executing a simple read operation on the remote server and making sure the operation completes without an issue.

Same as before, this step can be skipped if not relevant to the secret context.

After making sure the new version of the secret is the actual one usable (where relevant), we can transition it to the AWSCURRENT label. When we perform this step AWS does two things.

After executing this step, we are done! The secret has been successfully rotated, and the new value will be returned for all the read operations from this point onwards. 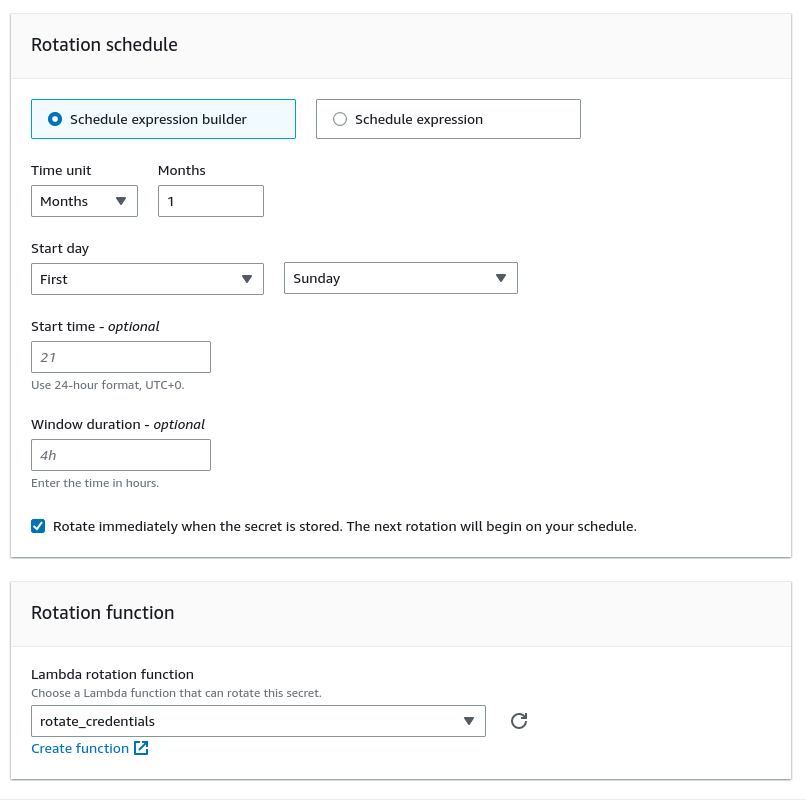 The secret can be rotated immediately as well, which is a great way to iteratively develop the logic without having to wait until the schedule triggers rotation.

As always, a few things can go wrong during development of the Lambda function for your specific use case.

In most cases, the secret will end up a state with a version ID different to the current ClientRequestToken having AWSPENDING staging label. Following the instructions detailed above in the createSecret section, the older version ID can be removed. However, take into account the step at which the rotation process failed. If the secret is managing access to a remote service and rotation process failed after a successful setSecret step execution, you may need to manually revert the credential changes done in the remote server before deleting the older AWSPENDING version, to avoid losing access to the service.

All code mentioned in this post is available on the Github repository.