This is part of a series of short articles on setting up an ELK deployment on K8s.

Now that the logs are translated into a meaningful set of data, it’s time to store and index them for querying. ElasticSearch is the tool of choice, the main attraction of the stack to be honest. It’s an efficient useful tool to store and index unstructured data. How ElasticSearch’s design (which is something that was done in a time when Docker was not even invented yet) is matched to K8s is an interesting story of itself.

Other than the number of Shards per index, ElasticSearch requires very little in terms of configuration to startup. However, just one ElasticSearch instance is not considered a healthy cluster, and given that the resource usage of the Shards go up proportionately to the number of requests and the data stored, it’s a good idea to scale out from the get go. In the previous article, it was discussed how Logstash could send logs from different sources on different dates to separate indices in ElasticSearch. For a small K8s cluster with two Namespaces, this pattern would create at least four new Shards in the ElasticSearch cluster. This can easily get out of control and result in resources being wasted on idle maintenance cycles for the running Shards. Furthermore, scaling out an existing ElasticSearch cluster could result in a considerable downtime (especially if the ElasticSearch cluster already has a high number of running Shards), since Shards may have to be rebalanced among the new instances of the cluster. So it is important to figure out the cluster requirements before the deployment.

For our sample problem, a 2-node ElasticSearch cluster is enough, although better fault tolerance is achieved with odd numbered clusters, as odd numbers reduce the possibility of split-brain situations during most faulty scenarios. However, for the scope of this article, the configuration that would work for a 2-node cluster will also work for a 3-node cluster. 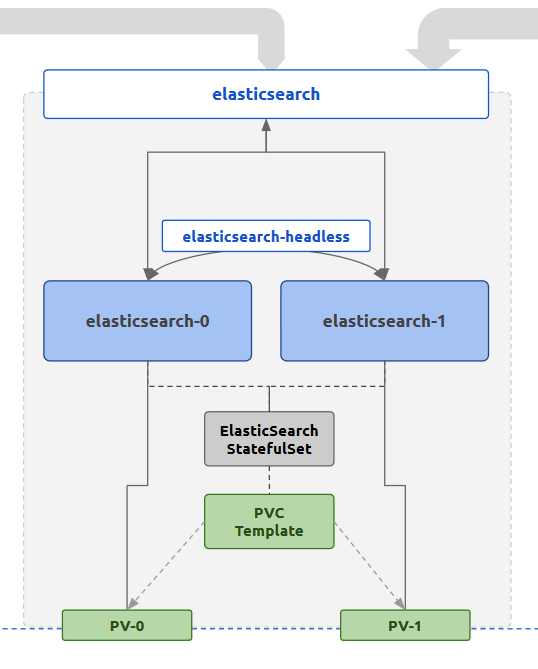 The K8s controller used for the ElasticSearch deployment is a StatefulSet. This is because of the persistence and network consistency that the log persistence tool requires. StatefulSets will schedule Pods in a manner that makes sure in case of Pod downtimes the same resources will be allocated to the newly created Pods during healing. These include any persistent volumes attached to the Pods in addition to consistent networking through the use of Headless Services where each Pod will have a standard consistent name to be reached. Each Pod is also started in a sequential manner where for a replica count of 3, the start sequence will be pod-0 , pod-1 , pod-2 . Each subsequent Pod will wait until the previous Pod becomes live and running. Together, these features provide a sane way of initializing a cluster where node membership is managed by well-known addresses rather than having to manage the dynamic nature of Pods in K8s.

ElasticSearch nodes can play different roles in a cluster depending on the configuration. These roles include,

In the sample setup we are discussing, both nodes are playing all the above roles. However, for a given cluster, there can be only one master node and all others nodes that hope to become one will have to be master eligible.

When an ElasticSearch cluster is first booted up, two tasks have to complete for a master node to be elected.

For a K8s setup, the Headless Service features that were described will help to complete both of these tasks.

Since these names are known before the Pods are actually spawned, including them in a ConfigMap and making ElasticSearch Pods use that configuration is possible. This would not have been the case if a Deployment and a typical Service were used in place of the StatefulSet and the Headless Service.

The configuration for elasticsearch.yml could look like the following.

With the successful and healthy GREEN ElasticSearch cluster, the data pushed from Logstash will correctly be stored and indexed. Now these can be queried for all kinds of purposes, through either the ElasticSearch REST API or the visualization tool, Kibana which will be discussed in the next article.