This is a continuation of the addendum to a series of articles on ELK on K8s.

As discussed in the last article, I will try to lay out the configuration details of a usable SSO based authn/authr design for an ELK deployment. Note that for certain features mentioned in this article to work, some features that are in the paid ElasticSearch tiers have to be available.

First, let’s take a look at our IDP solution. KeyCloak is an OpenSource IDP backed maintained by RedHat. The community around KeyCloak is supportive, although the mailing list is hard one to keep hold of (you get dropped off the list soon if too many emails bounce back, and for some reason my Gmail address seems to do that a lot). As an IDP, KeyCloak supports SSO through SAML and OIDC protocols. In addition to the built-in user store, KeyCloak can also make use of external user stores (for an example, the internal LDAP directory of an organization), and also can act as a IDP federator for other identity providers such as Google and Facebook.

As far as multi-tenancy goes, KeyCloak implements what it calls “Realms” which can be considered as multiple instances of KeyCloak in the same JVM (KeyCloak runs on a JVM and is written using Java). Realms have their own users, groups, roles, attributes, and configurations, and for all intents and purposes, one KeyCloak Realm in the same JVM is as far away for another KeyCloak Realm as a separate KeyCloak instance on the other side of the world.

The exception to the Realm separation is the built-in realm named master which has access to all other realms as a means of administration.

For the purposes of this article, KeyCloak’s support for OIDC, SAML, and the concept of Realms will be used in the SSO and multi-tenancy design. 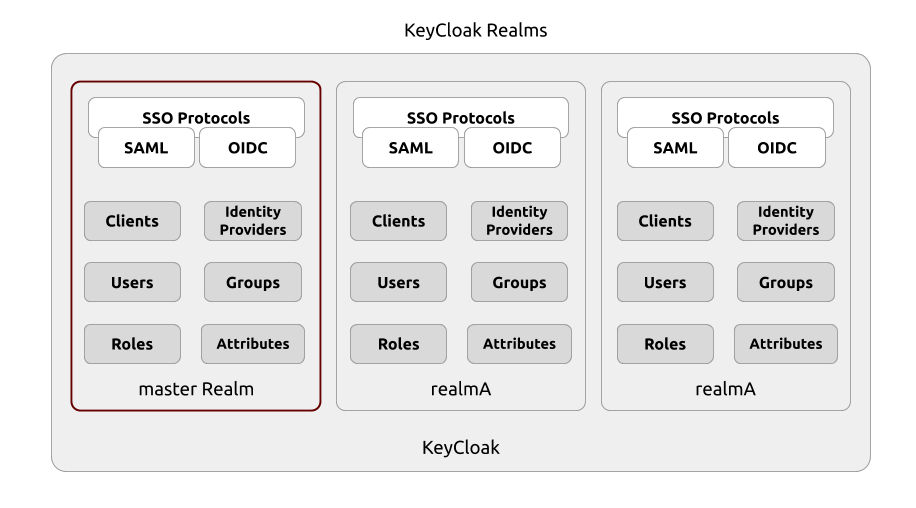 Authentication with no Multitenancy

Enabling an external IDP based authentication in ElasticSearch is somewhat straightforward. We just need to configure the IDP for ElasticSearch and point ElasticSearch to the proper IDP endpoint for the selected SSO protocol. For this to work, both parties (the Service Provider and the Identity Provider) should be resolvable at the end user’s terminal.

We will first configure KeyCloak to include configuration about the Kibana Service Provider and generate a Client for Kibana to use to initiate SAML communication. These information will then be used to configure ElasticSearch and Kibana to direct them to KeyCloak Identity Management instead of Basic Auth being used by default.

For the following configuration snippets, these URLs are assumed.

For KeyCloak, we can use a single Realm as an IDP for ElasticSearch. Each Realm has a concept called Clients which are configurations for Service Providers that will be using the Realm as an IDP. Clients are of different types based on the communication protocol used. Since we are going to use SAML as the SSO protocol, we can create a SAML client in the selected KeyCloak Realm that contains the configuration for the Service Provider, which is Kibana in our case.

Although it is ElasticSearch that contains the configurations on how to do authn/authr, it is Kibana that is going to use those information to authenticate end users for our story. API access to ElasticSearch will still be using Basic Auth, as using SSO protocol flows for API access is out of scope for these articles.

When creating a SAML client, the publicly resolvable URL of the Kibana instance has to be used. This is the URL that will be trusted to initiate the SSO flow for this client. We will also configure Kibana to use the same URL in the SAML request document for this validation to go through.

Additionally, one or more valid redirect URLs should be specified. If the incoming SAML request doesn’t have a redirect URL matching any in that list, the SSO request will be denied.

Following is the configuration that should end up in the elasticsearch.yml file. Note that the key, xpack.security.authc.realms.saml.cloud-saml could be changed for on-premise deployment to be one that uniquely identifies this IDP configuration. However for ElasticCloud deployments, the existence of cloud-saml as the key is a must for SAML (and apparently OIDC) to work at this moment. ElasticCloud seems to work in a different way than you’d expect a managed ELK deployment to work, being restrictive about which configurations should be used in what way.

Note that exactly the same URLs specified earlier in KeyCloak SAML Client configuration, have to be specified here for Kibana for validations in the SAML requests and responses to work.

At this point, the basic configurations that point the Service Provider and the Identity Provider at each other are done. Ideally these should be enough to make SSO happen for Kibana based on KeyCloak.

However, the user that will get authenticated through this process is still not properly authorized to be performing any actions on the ElasticSearch cluster. Next set of configuration steps will try to assign an ElasticSearch Role to the User through a RoleMapping, otherwise known as Role Based Access Control.

Authorization is the process of assigning proper permissions for the already authenticated users. This will make sure that only users with predefined attributes are allowed to perform certain actions (ex: READ from indices with names matching the pattern logstash-org1*, MODIFY advanced settings in Kibana). These attributes that determine access could be as granular as something like the username (ex: specifying only username bob is allowed to perform super user tasks on ElasticSearch) to others such as KeyCloak realm name, and role mappings (ex: only users from master KeyCloak realm are able to perform super user tasks, only users with role KIBANA_ADMIN are able perform write operations such as creating visualizations).

This could be taken to another step where Kibana Space level permissions can also be leveraged (ex: only users from realmA KeyCloak realm with role mapping KIBANA_ADMIN are able to do write operations within Kibana Space Organization A). This is a topic for another article to cover.

How these permissions are granted to users in ElasticSearch is through Roles. An ElasticSearch Role is a grouping of Permissions, action-index lists (that specify which actions can be done on which indices), and action-space lists (that specify which actions can be done within which Kibana Spaces). In addition to the custom roles that can be created, ElasticSearch also has a few built-in Roles that enable leveraging RBAC right out of the box. For the purposes of this article, we can use one of these roles, specifically superuser Role to grant the authenticating user every permission on the ELK cluster (because Security should only be an afterthought! Yes, I am not serious).

To assign the role superuser to every user authenticating through KeyCloak, there should be a document that gets evaluated during the process of authorization. A RoleMapping is this document that contains the set of rules for the user (or to be more specific, the authentication response from the IDP) to match, and the final role (or roles, since multiple roles can be assigned to a user) to be assigned. This document has to be created by hand.

The above role mapping definition contains the following information.

The above role mapping can be created in ElasticSearch using an API call (since as of version 7.4 a Kibana UI feature for the same option cannot be found). Note that the definition can slightly change if your ELK stack version is different (Elastic is notoriously careless about keeping contract in its API).

At this point, the users authenticating through KeyCloak should be able to perform any task inside Kibana. We have achieved a basic level of authentication and authorization with KeyCloak SSO for ELK!

Any unauthenticated user visiting https://kibana.my.org should now be redirected to the KeyCloak web UI (specifically the UI for the realm elastic and the Client for Kibana). If they have credentials for users in elastic KeyCloak realm, they should be able to use those credentials to log in to KeyCloak, which will then send a proper SAML Assertion document for ElasticSearch to evaluate. The role mapping that was added to ElasticSearch will kick in and assign the role superuser to the user, who will be granted access to Kibana web UI afterwards.

A couple of things to note are,

In the next article, let’s explore an approach to inject multi-tenancy into this SSO model.